Posted on November 3, 2016 by Stephanie Davis To listen to this weeks song for meditation, Click on Don’t Count Me Out by Marvin Sapp

I thought this write up would be a great article to compliment Dr. Celeste Owens talk about rejection, so I retitled this “Reject Rejection.” Enjoy!

Not exactly sure why God created me. Life hasn’t seemed all that it’s cracked up to be.

As far as I can remember I had never been happy.

My Parents were and are happy people.

So why does it feel like I was born miserable?

I was treated bad when I was in grammar school.

Talked about to the point that I became suicidal. From that moment on I developed a kind of pattern.

“I’ll never be anything.” (KILL YOURSELF!)

The enemy has a way of trying to shove something in your face or down your throat. He’s always screaming LIES!!!

That’s exactly how my life ran before I accepted Christ into my world and began to see things differently.

I’m a least of these.

This is what Dr. Owens and I have coined.

It’s the person that has come from and unlikely background or made to feel like they would never amount to much of anything that matters;

But is now destined for GREATNESS!!!

Are you a least of these?

Do you feel that you got the short end of the stick in this thing we call life?

Were you treated with disdain, raped, molested, beat, locked up, abandoned, lacked love or anything else that has plagued you into believing that you’ll never be great?

If yes, then you are in good company.

Your humble beginnings, or in between’s doesn’t determine your END!!!

David was so looked over that even when Samuel came to anoint the next king, David’s own father didn’t even see fit to call him to the ceremony.

Because of God’s hand on Joseph’s life, his brother’s hated him so, that they actually plotted to kill him; but last minute plans were changed and they were convinced to sale him instead.

His brothers probably assumed that Joseph had been killed along the way but he ended up becoming second in command to Pharoah. (Genesis 41:1-45)

Rahab was a known harlot at the time that she helped the spies escape Jericho.

If you notice, in the Word 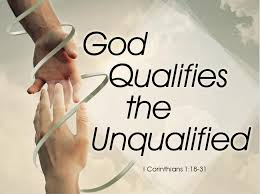 He’s not disturbed or hindered by your flawed background.

He uses it to bring glory to Himself.

Unlike the world who’s looking for a warp since of perfection, that is made up of deceit,

God is looking for someone who knows that they are flawed and is transparent enough to allow God to use them in a way that will bring healing and  deliverance to others.

Don’t count yourself out. God is not finished with you, He’s making you. (Jeremiah 1:5)

He’s not caught off guard by what you’ve been through. He’s not shaken or rattled.

He’s pleased with you.

You and your flaws are perfect to Him

and He wants to use you for His glory.

All you have to do is believe the TRUTH above the lies.